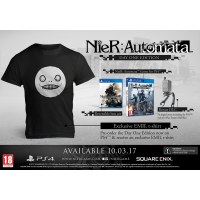 We buy for: £8.80
NieR: Automata is a revolutionary Action RPG set in a post-apocalyptic world overrun by machine lifeforms and abandoned by mankind. As part of an android army created by humans to reclaim the planet, players will fight their way through the mechanical horde using a collective of close-combat weapons and ranged attacks. Humanity has been driven from the Earth by mechanical beings from another world. In a final effort to take back the planet, the human resistance sends a force of android soldiers to destroy the invaders. Now, a war between machines and androids rages on… A war that could soon unveil a long forgotten truth of the world. Features: • Action-Packed Battles. • Beautifully Desolate Open-World. • Masterfully Crafted Story and Characters. • Elements of an RPG. • Utilise the Pod Support System to Assist In and Outside of Battle. • Auto Mode Available for Beginners.
PF848
Check out what our customers say Click on any logo to view feedback
Trustpilot