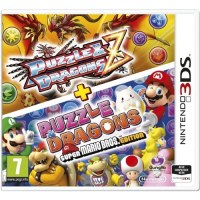 We buy for: £2.10
Sell 3DS Games. Get Cash for Puzzle & Dragons Z + Puzzle & Dragons Super Mario Bros. Edit. Role-playing elements and match-three puzzle fun meet in Puzzle & Dragons Z + Puzzle & Dragons: Super Mario Bros. Edition, available only on Nintendo 3DS family systems. In a single package containing both games, explore dungeons, command monsters and defeat enemy hordes in the Puzzle & Dragons Z, or travel the Mushroom Kingdom to rescue Peach in Puzzle & Dragons: Super Mario Bros. Edition. Puzzle & Dragons Z takes place in the land of Dracomacia, where you are a new Dragon Tamer, one of only a handful of people able to control monsters using Orb energy. After you’re recruited into the Rangers, an organisation that researches dragons, there’s barely pause for breath, as an evil force called Paradox takes control of the five Skydragons, breaking Dracomacia apart! Save the Skydragons; save the world! Set off on adventure and search deep, dark dungeons, picking your route at branching paths. You’ll also encounter enemies aplenty, battling them with your own team of six monsters by matching three or more elemental Orbs of the same type; move Orbs around the screen freely to make the most of your moves. There are five types of elemental Orbs, each with a different attribute: Fire, Wood, Water, Dark and Light. Strategy is the key – Fire beats Wood, Wood beats Water, Water beats Fire, while Dark and Light cancel each other out, letting you deal greater damage or defend against strong attacks. As remaining elemental Orbs drop into new spaces, you can trigger chain-attack Combos that increase your hit power! Watch out for Heart Orbs, which replenish health, and shiny Z-Orbs, which deal triple damage once cleared. You’ll need great command over all manner of Orbs if you hope to defeat the boss lurking at the end of each dungeon! Discover over 200 types of enemy to recruit from, including dragons, knights and even demons. Each has different statistics, such as health, attack power and recovery ability, as well as one of various battle skills, like special moves, defence boosts, and status changes. You can level your monsters up through experience points earned in battle, and also use Chips dropped by enemies to evolve your monsters, making them more powerful. Keep your eyes open for enemy eggs after skirmishes, as you can hatch them into new monsters, too. Puzzle & Dragons: Super Mario Bros. Edition gives the gameplay a Super Mario Bros. spin, as the heroes traverse the Mushroom Kingdom on a mission to rescue the captured Peach, and put a halt to Bowser’s rampaging shenanigans! Across eight Mushroom Kingdom worlds, each with various courses, you’ll experience the same colourful, match-three fun, encountering Yoshi, Toad and other favourites. Uncover secret courses, collect items and coins, and even recruit new allies direct to your team from post-battle? Blocks. If you don’t quite make it through a battle, a helpful continue might just be your ticket to victory! Whether you prefer strategic breadth or a streamlined Mario experience, Puzzle & Dragons Z + Puzzle & Dragons: Super Mario Bros. Edition is a double-whammy of exciting, match-three action that should satisfy puzzle and RPG fans alike, only on Nintendo 3DS family systems. Features: • It’s all about colour, collecting and strategising in this double delight of match-three puzzle action! • Master all types of elemental Orbs to explore dungeons, collect and evolve new monsters, and vanquish enemies. • Keep the adventure fresh with exciting new content to unlock, and rare monsters to collect! • Enjoy a streamlined version of the game by playing as the Super Mario Bros. on their own quest to rescue Peach!