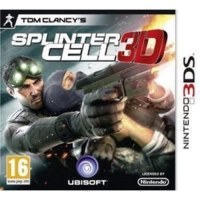 We buy for: £1.05
Sell 3DS Games. Get Cash for Tom Clancy's Splinter Cell 3D. In Tom Clancy's Splinter Cell 3D, Sam Fisher is sent behind enemy lines in the Korean Peninsula to prevent WWIII, by investigating the responsible party that sunk the USS Clarence E Walsh, U.S.'s most advanced cruiser. Through his investigation, Sam learns that the key parties who are planning to use the Masse Kernels and launch WWIII are war comrade Douglas Shetland, Displace International, and Admiral Otomo, the Third Echelon Information Self Defense Force (I-SDF) contact. His goal will be to infiltrate their lines and expose their deeds before they manage to launch a new and deadly worldwide conflict. The cutting edge hardware of the new Nintendo 3DS allows Splinter Cell fans and all stealth/action addicts to experience an immersive 3D adventure, interacting with the game like never before. Features * Immersive 3D Action. Gameplay, Cinematic, Maps, HUD, Menus, Loading screens, and more are all rendered in stereoscopic 3D * Optimized Controls. New button mapping with the Slide Pad and Touch Screen gives the player seamless control to equip weapons and gadgets for incredible comfort and reactivity leading to improved skill in mission executions * Enhanced Weapons. Sam Fisher is equipped with enhanced weapons and top-notch gadgets to infiltrate the enemy: new fusion goggles, OCP electronic disabling device, wall mine, more add-ons to SC-20K rifle, smoke and gas grenades * Infiltration Evolved. Lock is more intuitive than ever thanks to the new Slide Pad that mimics the realism of lock picking. Hacking has also evolved from numeric codes to solving interactive 3D puzzles