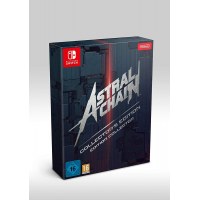 We buy for: £34.49
Sell Switch Games. Get Cash for Astral Chain Limited Edition. As part of a police special forces unit in a multi-cultural futuristic city, players work together with a special living weapon, the Legion, in a synergetic action system of battle and exploration. Features: * Coming exclusively to Nintendo Switch. As part of a police special task force, it's up to you to fight against mysterious, alien-like creatures who have invaded the world. * Choose between two playable characters, one male, one female on your adventure. The character you don't choose also appears as your younger twin, and a fellow member of Neuron. * In order to resist the creatures, humanity developed a special weapon: The Legion. The Legion acts as your partner and helps with your investigations. * Work together with the Legion and use all sorts of combat styles to fight your enemies. Use this synergetic action system to battle and explore together.