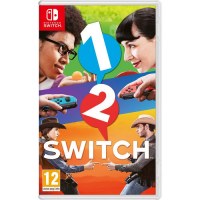 We buy for: £9.79
Sell Switch Games. Get Cash for 1-2-Switch. Throw an impromptu party anywhere. Players compete in fun activities while staring into each other's eyes instead of at the TV screen. From wild west gunslinging to copying each other's dance moves, the games in 1-2-Switch make creative use of a broad variety of Nintendo Switch features to liven up parties with anyone, anywhere, at any time. Features: * Face-to-Face Play – Look at your friends rather than the screen as you compete in a new style of video game party full of fast and fun face-to-face games. Stare down your opponent in a wild-west duel, mimic your opponent's poses in a copycat dance-off, or rally for victory in a heated table tennis face-off. * Anywhere with anyone – Bring fun and surprise to barbecues, house parties, or wherever you travel by using the built-in stand of the Nintendo Switch system. The Nintendo Switch system comes bundled with a pair of Joy-Con controllers, allowing the party to start with just one system and the game for instant multiplayer fun. * Intuitive and simple controls using Joy-Con features – Simple rules make it easy for anyone to play and fun for everyone to watch. Each player holds a single Joy-Con, and different games use different controller features, such as motion control, HD rumble, or the IR Motion Camera.