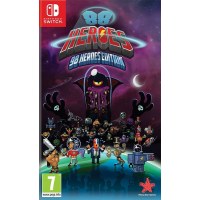 We buy for: £3.05
Sell Switch Games. Get Cash for 88 Heroes 98 Heroes Edition. It's 8:08am on 8th August 1988, and the evil Dr H8 has brought the world to the brink of total annihilation! His demands are simple: pay USD88 octillion within 88 minutes, or Dr H8's 88 thermo-nuclear warheads will wipe out the Earth! But who will save us in our time of need? The bravest? The boldest? No... the 88 Heroes! Prepare to infiltrate Dr H8's lair with the help of the strangest, dumbest and most pointless superheroes ever! With 88 levels between you and Dr H8, only 88 seconds to complete each level and the 88-minute Doomsday clock already ticking, lead a unique band of heroes - each with their own special abilities - on a platform-hopping, enemy-smashing, danger-dodging mission to save Earth from complete destruction. And with ten extra heroes and a new mode featuring eight of the toughest challenges yet, 88 Heroes - 98 Heroes Edition for Nintendo Switch has everything you need to defeat evil once and for all! Features: * The Nintendo Switch edition of the acclaimed game features all of the frantic fast-paced and funny action of the original release, plus the DLC pack RSG Champions' previously available on other formats, as well as the forthcoming DLC pack H8 Mode Activate'. * The RSG Champions' pack comprises eight playable heroes taken from other smash-hit indie games published by Rising Star Games, in a crossover of colossal proportions! Characters include Rusty from SteamWorld Collection, Gunborg from Zombie Vikings, and Conga Master, from, well, Conga Master. Meanwhile the H8 Mode Activate' pack offers up a further two playable characters and a collection of eight hardcore challenge levels to seriously test your platforming prowess.