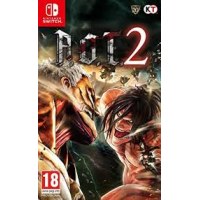 We buy for: £29.05
Sell Switch Games. Get Cash for A.O.T. 2. A.O.T. 2 builds on the fast-paced action the series is famous for, and features an abundance of new mechanics. Once again players will don the renowned Omni-Directional Mobility Gear as they fight to repel the fearsome Titans that threaten humanity, and restore peace within the walls. Delving deeply into 'Attack on Titan's' fantastic narrative, players will experience the gripping events of the anime's second season - as well as the action packed battles from Season 1 from an all new perspective! Experience the gripping events of the anime's second season: A.O.T. 2 allows players to play through the epic narrative featured in the second season of the worldwide anime hit, 'Attack on Titan'. Learn the truth behind the walls as you once again don the Omni-Directional Mobility Gear and fly into action! Enlist as a Scout!: For the first time in the series, players are able to create their own scout to take into battle! The customised scout will be a pivotal character in the title's narrative; reliving the events of Season 1 through a new viewpoint - adding a new immersion into the 'Attack on Titan' universe. Deep Character Relationships: Deepen your relationships with key characters in the 'Attack on Titan' universe outside of battle, with revamped RPG elements! This deeper immersion into the title's universe will allow players to find out more about their favourite characters as they go about their day-to-day lives. Enhanced Combat Mechanics: Players will experience exhilarating action and all new challenges with the newly improved Omni-Directional Mobility Gear, offering advanced freedom of movement and targeting precision to counter enhanced Titan movements.