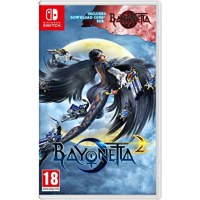 We buy for: £13.59
In this climactic sequel to the critically acclaimed Bayonetta action game, players will be on the edge of their seats from start to finish. Brimming with jaw-dropping battles and gorgeous cut scenes, this game never lets up on the action, and has been reborn on Nintendo Switch. Fight on top of a jet as it soars through a downtown city. Duke it out against a giant angelic monster with a deadly whip-like arm on top of a speeding train. And take to the skies in a fight against a demonic dragon while ascending to the top of a skyscraper. Features: • The Witch is Back: Born of a forbidden union between the Lumen Sages and the Umbra Witches, the mighty witch Bayonetta travels from the distant past to the present day. With her graceful fighting style and peerless magical powers, she captivates and terrifies her opponents in their final moments. Armed with deadly weapons and abilities, Bayonetta has her enemies baffled by her moves and torture attacks. Using magic, she can unleash an ability called Umbran Climax to summon demonic monsters and deliver mighty attacks repeatedly. • Play Your Way: Choose between Classic and Touch play styles. The Classic Controls represent the technical control scheme unique to Bayonetta, an acclaimed control scheme that fans of the original game love and all action game fans will enjoy. The Touch Controls, on the other hand, offer a more convenient play style for those unfamiliar with action games or simply looking for a new spin on action. Players can use the Nintendo Switch touch screen to easily manipulate Bayonetta as she moves, attacks and evades enemies. Bayonetta’s longtime friend and fellow Umbra Witch, Jeanne, appears to assist Bayonetta in performing combination attacks and in doling out intense punishment against enemies. You can even take all the action with you and play anytime, anywhere. • Exclusive to the Nintendo Switch Version: Join forces with a friend - whether across the room or across the world - to fight through waves of enemies in the local and online multiplayer Tag Climax mode. Choose from a range of powerful characters, and give angels and demons a beating that's as brutal as it is beautiful. By tapping in compatible amiibo (sold separately), you can instantly unlock a number of Nintendo-themed costumes for Bayonetta to wear, weapons to use and more. • Includes download code for Bayonetta.
SW108

Check out what our customers say
Trustpilot