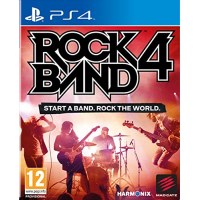 We buy for: £12.49
Music game pioneer Harmonix Music Systems, Inc. is taking the highest-rated interactive music gaming platform to the next level with Rock Band 4. Winner of multiple awards and nominations at the 2015 Electronic Entertainment Expo (E3), including "Best Music Game" from IGN and Game Informer, Rock Band 4 delivers the ecstatic rush of a live band performance like never before. Building upon the full-band experience people love, Rock Band 4 delivers innovative new features - allowing you to add your personal signature to every performance. Combining next-gen visuals, an expansive soundtrack featuring some of rock's biggest acts, compatibility with your previously purchased DLC and wireless legacy Rock Band guitars and drums,* Rock Band 4 is creating the defining music gaming platform for this generation. Features: • Start A Band. Rock The World. • With Rock Band 4’s Freestyle Guitar Solos, Dynamic Drum Fills and Vocal Improvisation, you can string together blistering guitar licks, wow the crowd with legendary drum solos or put your own spin on favourite songs. • Rock Band 4 is packed with songs from legendary musicians, the hottest artists of today. • Rock Band 4 seamlessly supports legacy Rock Band wireless guitars and drums and wired/wireless microphones.
PF354
Check out what our customers say Click on any logo to view feedback
Trustpilot