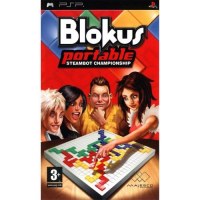 We buy for: £0.15
Sell PSP Games. Get Cash for Blokus Portable Steambot Championship. The most celebrated game of the century is coming to your PSP! Since its introduction in 2000, the Blokus board game has sold 3 million games and become a classic in 35 countries. It has also earned 26 prestigious awards worldwide, including the Cannes International Toy Festival award, the Paris Toy Grand Prix and the Japan Boardgame prize. Now this fan and critic favorite blends its outstanding puzzle gameplay with the beloved characters from the Steambot Chronicles series. Simple to learn but difficult to master, Blokus Portable: Steambot Championship will have you hooked in no time! Features: * Based on the best-selling, award-winning board game phenomenon-Blokus! * Each player places his/her pieces on the board in turn, ensuring that the pieces of the same color touch at one or more corners, but never along the sides. The objective is to strategize and conquer as much territory as you can before your opponent/s beats you to it. * Combines the original 4 player Blokus and the 2-player Blokus Travel/Duo * Unlock and play with 18 unique anime characters from the Steambot Chronicles series * Earn "dollarinos" to customize your character's name, gender and appearance (clothing, hat and hair style) * Up to 16 players can link up wirelessly and compete against each other in ad hoc wireless mode * Play up to 3 friends on your PSP with only one UMD using the ad hoc game sharing mode. * Send your "electronic business card" to anyone you play against in wireless mode. Your business card contains your character name, icon, multiplayer win record and more!