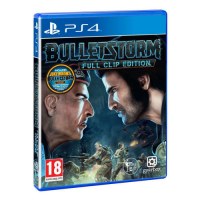 We buy for: £2.53
Step into the boots of Grayson Hunt after a crash landing on an abandoned resort planet forces him to make a hard choice: survival or revenge. An exiled member of the elite assassin group Dead Echo, Grayson's blind desire for vengeance finds his crew stranded on Stygia where he can finally confront the commander behind his betrayal-or get his team off the planet alive. Battle your way through throngs of Stygia's mutated inhabitants, performing masterful kills throughout the single-player campaign-or one of 30 competitive score-challenge or 12 co-operative multiplayer maps-using Bulletstorm: Full Clip Edition's unique "Skillshot" system that rewards you for executing the most creative and deadly kills imaginable. Bulletstorm: Full Clip edition is the definitive Bulletstorm experience that includes all existing Bulletstorm add-ons, plus brand-new content exclusive to Full Clip; updated with hi-res textures, increased polygon counts, sterling audio, and smoother frame rates-all running in up to 4K resolution on PS4 Pro. Includes Bonus Day One content - Get Duke Nukem's Bulletstorm Tour free. Pre-Order Now - Limited Availability! Duke Nukem's Bulletstorm Tour brings the Mighty Foot to Stygia! Play through the entire Bulletstorm: Full Clip Edition campaign as Duke Nukem, the original FPS action hero, featuring a fully rerecorded script and brand-new lines from the original voice of Duke! Features: • Includes Bonus Day One Content - Get Duke Nukem's Bulletstorm Tour Free! • Updated Visuals: Fully remastered with updated models, environments, and animations, with 4K support on PS4 Pro. • Upgraded FPS: Bulletstorm: Full Clip Edition runs at a smoother frame-rate than ever before on all platforms. • New 'Overkill' Campaign Mode: After completing the campaign, players can start up an 'Overkill' campaign that has all weapons and skill shots unlocked from the start. • 6 New Echo Maps and Remastered audio effects.
PF827
Check out what our customers say Click on any logo to view feedback
Trustpilot