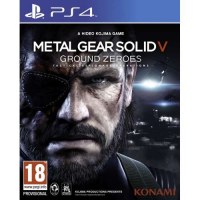 We buy for: £1.76
Metal Gear Solid V: Ground Zeroes acts as a prologue to Metal Gear Solid V: The Phantom Pain and takes place one year after the events of Metal Gear Solid: Peace Walker. Assuming control of the legendary Snake (a.k.a. Big Boss), players are charged with the infiltration of Camp Omega where both Paz and Chico are held. The hostages hold key information concerning Snake and his private military organisation that Snake and his ally Kaz Miller must prevent from being exposed. Ground Zeroes charts the rescue and the subsequent fallout that leads into the beginning of the The Phantom Pain. Ground Zeroes also acts as a bridge between previous Metal Gear Solid titles, easing players into the vaunted open world of MGSV. Features: • The power of fox engine – Ground Zeroes showcases Kojima Productions’ stunning FOX Engine, a true next-generation game engine which revolutionizes the Metal Gear Solid experience. • Introduction to open world design – The first Metal Gear Solid title to offer open world gameplay. Ground Zeroes offers total freedom of play: how missions are undertaken is entirely down to the user. • Unrestricted stealth – Imagine classic Metal Gear gameplay but with no restrictions or boundaries. Players use intelligence and cerebral strategy to sneak their way through entire missions, or go in all guns blazing. Each will have different effects on game consequences and advancement. • Multiple missions and tasks – Ground Zeroes boasts a central story mode and additional side-missions ranging from tactical action, aerial assaults and “covert” stages that will be sure to surprise. • Redesigned interface – Ground Zeroes users will benefit from a clean in-game HUD that shows the minimal amount of on-screen data to give a more intense gaming experience. • Various in-game weather settings – Ground Zeroes will test the player in a variety of time and weather environments that will be central to METAL GEAR SOLID V: The Phantom Pain. Use night conditions to your advantage, or poor weather as strategic cover. • True next generation gaming – Available simultaneously with the current generation of gaming consoles, Ground Zeroes will give PS4 and Xbox One consumers the chance to showcase the power of their new machines.
PF61
Check out what our customers say Click on any logo to view feedback
Trustpilot