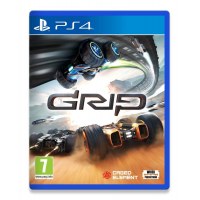 We buy for: £5.94
GRIP is a high octane, hardcore combat racer, packing ferocious speed and armed to the teeth with heavy weapons.Evolved from the age of street racing, the world of GRIP is brutal and cut-throat to the core. To win the race is never enough, greatness comes from the journey and the trail of merciless destruction you unleash upon your rivals along the way.Scale walls, ceilings and anything else you can get your tyres on to... as you master tantalising tracks, tricks and perform mind-blowing stunts to race your way across the cosmos. Customise your vehicle, utilise devastating weapons and exploit a destructible environment to ensure not only victory, but the complete annihilation of your opponents.Harnessing gravity defying physics alongside a bristling arsenal of outlandish weapons, GRIP delivers the fastest, most competitive racing experience ever. Featuring a killer soundtrack, furious speeds and intense action, GRIP is guaranteed to generate unforgettable gaming moments - online or offline - with nail-biting split screen racing and tournaments.Features:• Hardcore combat racer. • Ferocious speed. • Gravity defying physics. • Arsenal of outlandish weapons. • Customisable Vehicles. • Destructible Environments. • Killer Soundtrack. • Online and offline racing.• Split Screen capable.
PF1358
Check out what our customers say Click on any logo to view feedback
Trustpilot