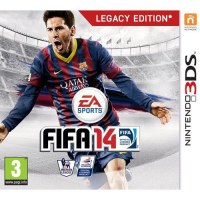 We buy for: £1.32
Sell 3DS Games. Get Cash for FIFA 14. The most authentic football game on 3DS with over 30 officially licensed leagues, 500 clubs and 12,500 players. FIFA 14 is the most authentic football game on Nintendo 3DS with over 30 officially licensed leagues, 50 real-world tournaments, 500 authentic clubs and 12,500 players wearing official kits. Play traditional 11 versus 11 matches or free your game in epic 5-v-5 street matches with full 3D effects. Play as a real-world superstar or re-create yourself and compete in 3D Street Football Mode. Optional touch screen controls deliver pin-point shooting and passing at your finger-tips. FIFA 14 features eight different game modes, including authentic 11 versus 11, head-to-head local wireless play using Nintendo® Wi-Fi Connection, Be A Pro, Tournament Mode with over 50 real-world competitions, and a full in-depth Career Mode. FEATURES: * Unmatched Authenticity—Compete with over 500 officially licensed clubs in 11 versus 11 matches in authentic stadiums from around the world. * Touch Screen Control—Optional touch screen controls change the gameplay experience. Pick a spot precisely from the player's viewpoint using the lower touch screen and then direct a shot past the keeper. * Precision Accuracy—Utilize touch screen controls on set pieces to draw a shot that curves the ball around, or even power it over the wall for the match-winning goal that lifts your club to victory. * 3D Street Football — Free your game on the street in epic 5 versus 5 street matches in the hottest locales around the world, everywhere from Brazil to the streets of France. * Be A Pro—Create yourself in game and become the next football legend. Begin the journey on the streets, build your reputation, and develop your skills to ultimately compete for your favourite club and national side. * Career Mode—Play or manage your way to glory. Make strategic decisions as the manager of your club. Set a goal and succeed and your team will enjoy performance enhancements; fail and watch your team's decline. * Head-to-Head—Play head-to-head local wireless using Nintendo Wi-Fi Connection against a friend in authentic 11 versus 11 matches or 5 versus 5 street games using Nintendo Wi-Fi Connection.