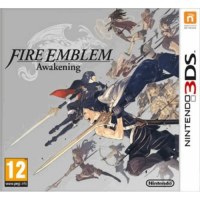 We buy for: £15.24
Sell 3DS Games. Get Cash for Fire Emblem Awakening. The world is ruled by the Divine Dragon Naga, with a fondness for humans, and the Fell Dragon, Grima, destroyer of humans. Prince Chrom of the Halidom of Ylisse and the Shepherds, his personal militia, find you collapsed without memory. They help you to your feet, so you join them on their journey. The Risen, undead soldiers of unknown origin are plaguing the land. A mysterious warrior wields a second treasured Falchion, which should not even exist. The neighbouring theocracy of Plegia is populated by worshippers of the wicked dragon. Are these troubling events connected somehow? As you fight alongside Chrom and his Shepherds, you are pulled into a major conflict that will change the world forever. Command an army of soldiers in a series of epic battles, of turn-based strategy. Along the way develop relationships with your team, use their unique abilities, on the battlefield to achieve victory, and advance the story. Features: * A Cast of Heroes: The story features a robust cast of characters from various nations and background. They can be joined by a character of your own creation, with a unique appearance crafted as you see fit. * Use strategy and teamwork to persevere: You'll need to strategically position your units for maximum effectiveness. Weapon and class compatibility have various effects on how the battle will unfold, and Pair Up System allows you to cooperate with a nearby ally to defeat an enemy. * Explore freely and craft the perfect challenge: Choose from three difficulty levels, plus two modes to set a challenge that suits you. “Casual” mode lets fallen units respawn in the next battle – while “Classic” mode means that defeated characters are gone forever. * Using the free map feature you can explore previously visited battlefields, shops, and more at you leisure.