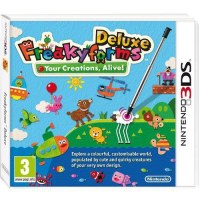 We buy for:
Sell 3DS Games. Get Cash for Freakyforms Deluxe: Your Creations, Alive. Let your imagination run wild this summer with Freakyforms Deluxe Your Creations, Alive! Bring your very own creatures to life, plucking each designed element from the depths of your mind to create something truly unique. Called formees, your customised creatures are created on a drawing board featuring a large palette of shapes, body parts and colours that can be put together and tweaked to transform them into pretty much anything. The only limit is your imagination. As the expanded version of the Nintendo 3DS Download Software title, Freakyforms, Your Creations, Alive!, this eccentric game is packed full of user-generated content and contains a wide range of new features for you to enjoy. There are a lot of body parts to choose from when designing your formee, such as wings allowing your formee to fly and wheels that will make your formee move much faster on land. Once you’ve mastered the drawing board and brought a team of formees to life, it is now time to explore the side-scrolling platform aspects of the game, exploring your personally customised planet and completing quests as you go. Enjoy discovering new body parts and locations, as the planet gets bigger as more formees are created. Try your hand at fruit eating, collecting money, unlocking and exploring dungeons. In each of the all-new dungeons, you are tasked with tackling a perilous task in order to find hidden jewels. By completing the dungeons you can unlock new abilities called Special Actions. These add another layer of personalisation to your formees through new animations and sounds such as shooting actual missiles from your formee or engulfing it in flames. Each dungeon features elements from the location in which it’s found such as water in the Ocean dungeon or wind currents in Cloudland. On every floor you must find a jewel which acts as the key to the next floor. Model formees and Guests’ formees from StreetPass will appear in each dungeon, trying to hinder your progress. Defeat these formees in order to reach the end and the final boss battle! For the first time, you can now also showcase your formees with other Nintendo 3DS users in multiplayer mode, in addition to sharing them over StreetPass, or via QR Codes which can also be used to import a formee into the game. If you fancy getting even closer to the little creatures, watch them come to life in front of your very own eyes using the “?” AR Card. Freakyforms Deluxe Your Creations, Alive! also comes with the option of utilising Download Play so if you wish to play with a friend who doesn’t own the game then they will be able to join in with the creative fun. With full Touch Screen controls, Freakyforms Deluxe Your Creations, Alive!, will provide everyone with hours of creative fun. Get designing and creating now, as the sky’s the limit when Freakyforms Deluxe Your Creations, Alive!