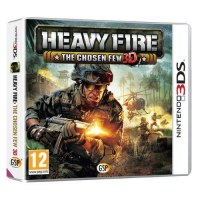 We buy for: £15.24
Sell 3DS Games. Get Cash for Heavy Fire: Chosen Few. Blisteringly fast-paced military action set in a modern-day Afghanistan! Fast, deadly and unrelenting combat! The enemy has underestimated us, and it’s time to take the fight to them. Attack across the globe on multiple continents, all in eye-popping full 3D. Attack from the skies from your helicopter. Sneak up on them from your attack boat. Demolish them with your tank. The story will unfold as you fight your way through a variety of environments. Chose from 30 high-powered military weapons in your quest to defeat the enemy. When the smoke clears you will become part of the legend of “The Chosen Few”. Features: • From the makers of the best-selling Heavy Fire games. • A completely new story, presented in comic book style throughout the game. • Fight your way through 13 diverse levels on multiple continents. • Choose from 30 high-powered military weapons. • Attack from a Helicopter, a Tank, and an Attack Boat.