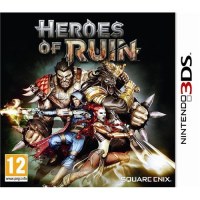 We buy for: £3.58
Sell 3DS Games. Get Cash for Heroes of Ruin. Heroes of Ruin is a brand new adventure created specifically for the Nintendo 3DS system. Heroes of Ruin pushes social and online interaction to the forefront of gameplay through innovative use of the Nintendo 3DS hardware. Players can trade rare and powerful items through an in-game shop which has an inventory updated through creative use of StreetPass. Connect your 3DS console online to download fresh daily challenges which allow you to earn rewards as you play. Heroes can choose to take the battle to the next level by connecting locally or over the internet to fight alongside their friends in cooperative multiplayer. The story of Heroes of Ruin follows four mercenaries who are attempting to find a cure for the ruler of the city of Nexus, who is dying from a curse. The four mercenaries each have their own strengths, weaknesses and motivations. One uses forbidden spells to rain death on her foes, one has guns and bombs to blast his way through, another has a mighty sword capable of slicing through entire packs of enemies, and one other gains strength from savagely tearing through anything that stands in his way with brutal, bladed fists. The heroes can either create an alliance or adventure separately. There are many strange and dangerous creatures in the land, including the evil force behind the curse, which the heroes eventually confront. Features: • Battle on your own in single player or join forces online in 4-player drop in / drop-out co-operative multiplayer. Chat with your team in real time using the 3DS microphone. • Customize your appearance with over 80,000 weapons, armour and items. • Explore and fight through varied and dynamic environments. • Test your combat skills and earn rewards by taking on new challenges downloaded daily to your 3DS for a year.