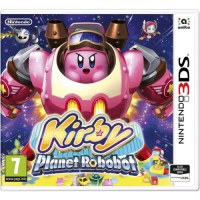 We buy for: £17.44
Sell 3DS Games. Get Cash for Kirby Planet Robobot. In Kirby: Planet Robobot invaders have mechanised Dream Land – to restore his home to its original form, Kirby must rise up against the robots! Kirby travels through stages by jumping back and forth between the foreground and background. He must use more than 25 Copy Abilities to borrow enemy powers to overcome various obstacles. Kirby can use his new enemies' robotic technology against them. Kirby's Robobot Armour is extremely strong and can even destroy obstacles that stand in Kirby's way. Like Kirby himself, the Robobot Armour can also copy enemy abilities and use powerful, modified versions of them. A separate mode is also included, Team Kirby Clash. In this mode, up to four players can join forces to battle against powerful bosses, with each player selecting one of four roles. Supporting your team and using each role's abilities is the key to victory. While you play Team Kirby Clash, you'll find tablets. If you collect them all, your team can activate a powerful Team Meteor attack and cause major damage. When you complete a quest, you'll gain experience points. As you level up, your abilities will become more powerful, allowing you to challenge more difficult quests. You'll be able to play Team Kirby Clash using Download Play* too, so you can play with friends who don't own the game yet. You can also play alone with computer-controlled sidekicks. Kirby: Planet Robobot is also compatible with amiibo (sold separately). If you tap an amiibo, Kirby will get Copy Abilities in the game. Some amiibo will even give you character-specific abilities. For example, if you tap the Mario amiibo, Kirby will get the Fire Copy Ability, and if you tap the Link amiibo Kirby will get the Sword Copy Ability. Alongside Kirby: Planet Robobot, a new line of Kirby series amiibo will be released, including Kirby, Meta Knight, King Dedede and Waddle Dee. When you tap any of these Kirby series amiibo, Kirby will receive a special Copy Ability. The Kirby series Kirby amiibo also grants him a power that you can only get with amiibo: the UFO ability. Features: * Dream Land's been mechanised – use over 25 Copy Abilities and the new Robobot Armour to save Kirby's home! * Smash through obstacles and use powerful versions of enemy powers with the Robobot Armour. * Take on missions for up to four players in Kirby Team Clash. * If you tap amiibo, Kirby can get Copy Abilities in the game.