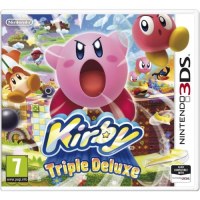 We buy for: £7.76
Sell 3DS Games. Get Cash for Kirby Triple Deluxe. Scroll side-to-side and shift back-to-front in Kirby: Triple Deluxe, only on Nintendo 3DS family systems! Discover hidden depths as Kirby leaps in and out of the background to explore new areas, solve puzzles and dodge enemies. But beware, bad guys lie in wait both before and behind you, and they can attack from all directions! Kirby has some surprising powers: with his powerful breath he can suck up anything in his way, from blocks to baddies, or even puff himself up and hover through the air! Use the pint-sized pink hero's trademark Copy Abilities by swallowing up enemies to borrow their powers. Inhale a sword-fighting foe and use the Sword Copy Ability to strike down danger, or absorb an explosive enemy and blast away with the Bomb Copy Ability. Play around with 25 different Copy Abilities, five of which were created just for this title! You can check your current Copy Ability's controls whenever you need a breather, so there's plenty of time to find your favourite! Gobble up a Miracle Fruit to unlock Kirby's hidden potential! Blow away the opposition with the new Hypernova ability, which temporarily turns Kirby's powers into a gale force to be reckoned with. In this state, Kirby can suck up much larger objects, shift heavy items and gulp on the go, allowing him to breeze right through any blockades! Take a break from the story with two new modes! Up to four players can fight each other in Kirby Fighters, a 2D beat'em up that gives you the chance to test which Copy Ability delivers the most damage in battle. If you're in a musical mood, dance to the beat of Dedede's Drum Dash, a rhythm action game that challenges you to jump in time to classic Kirby music while collecting plenty of coins! Dive into a new dimension in Kirby: Triple Deluxe, only on Nintendo 3DS! Features: * A new Kirby adventure in the tradition of the Kirby's Dream Land franchise. * 25 Copy abilities for Kirby, including 5 brand new ones, all with distinct skills and animations. * Extensive usage of the Nintendo 3DS' features, such as motion sensor, StreetPass, Download Play and autostereoscopic 3D. * A total of 256 collectibles (keychains) which can be swapped using StreetPass. * Two additional games (Kirby Fighters and Dedede's Drum Dash), as well as the time attack mode Dedede's Adventure.