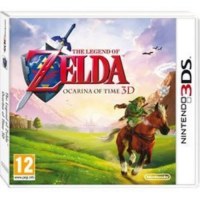 Legend of Zelda Ocarina of Time

We buy for: £8.80
Sell 3DS Games. Get Cash for Legend of Zelda Ocarina of Time. The Legend of Zelda series is making its way onto Nintendo 3DS. The Legend of Zelda: Ocarina of Time 3D, is a re-mastered version of the classic Nintendo 64 title. Originally released worldwide in 1998, the game has sold over 7.6 million copies worldwide and is considered one of the most critically acclaimed games in history. This new edition features enhanced graphics that depict the adventures of the heroic Link in captivating detail. Fans of the series can once again help Link on his quest to save Hyrule from the evil Ganondorf, by exploring many dungeons, temples and using the titular ocarina to aid him on his quest--this time all in 3D and all without the need for special glasses. The game also now takes advantage of the gyro functionality of the Nintendo 3DS console, by physically moving the Nintendo 3DS console players are enabled to explore and look around with a first person view.