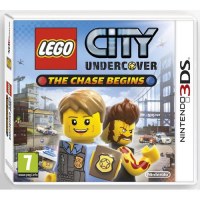 We buy for: £1.05
Sell 3DS Games. Get Cash for LEGO City Undercover The Chase Begins. LEGO City Undercover: The Chase Begins. A prequel to the Wii U game, follow the exploits of Chase McCain as a rookie cop. Find out how the story of Chase McCain begins. Chase McCain is on his first assignment as a police offer-and it's up to you to help him clean up LEGO City! By changing into different disguises, Chase has access to unique abilities, such as putting out fires as a Fireman and breaking open doors as a Robber. After using his skills to infiltrate criminal organizations, help Chase finish the job by slapping cuffs on the bad guys. With multiple areas of LEGO City to explore and a boatload of LEGO Bricks and Studs to collect, the chase has most certainly begun.