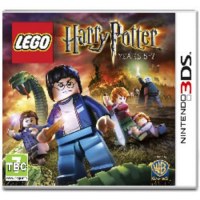 We buy for: £3.58
Sell 3DS Games. Get Cash for LEGO Harry Potter Years 5-7. Based on the last three Harry Potter books and final four films, LEGO Harry Potter: Years 5-7 takes players through Harry Potter's heroic adventures in the Muggle and wizarding worlds. From Privet Drive in Little Whinging to Diagon Alley, Hogsmeade and Hogwarts plus new locations including Grimmauld Place, the Ministry of Magic, and Godric's Hollow players will encounter new faces, new challenges and new magic, preparing them for the ultimate face-off against Lord Voldemort. LEGO Harry Potter: Years 5-7 on Wii builds upon the magical gameplay, lessons and potion-making skills learned in LEGO Harry Potter: Years 1-4 to equip gamers with the tools necessary to challenge a host of new foes and some familiar ones (including He Who Must Not Be Named). The title is action-packed from start to finish, including loads of new lessons, spells, and bonus content for hours of family friendly gaming.