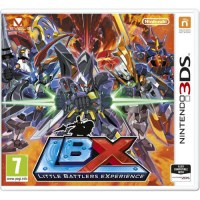 We buy for: £1.76
Sell 3DS Games. Get Cash for Little Battlers Experience. Little Battlers eXperience is the first game for Nintendo 3DS in the next hit series from developer LEVEL-5 - the force behind series like Inazuma Eleven and Professor Layton - which also spans a successful anime series, manga and toy line. The game follows the first season of the anime, set in the year 2046 and telling the story of Van Yamano, a middle-school student who is a fan of the palm-sized LBX robots: a range of toys that were previously deemed too dangerous to control. Since the invention of Battle Boxes - dioramas made from an advanced type of fortified cardboard - kids can safely let their LBXs duke it out in dedicated arenas via remote control units.