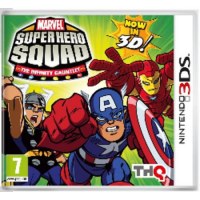 We buy for: £1.32
Sell 3DS Games. Get Cash for Marvel Super Hero Squad The Infinity Gauntlet 2. Hero up in 3D! Join Iron Man, Hulk, Wolverine and the Squaddies to collect six Infinity Stones from the villains who would use them to dominate or destroy the universe! It's up to you to prevent the Infinity Stones from falling into the wrong hands. Use unique powers and super smarts to overcome dastardly villains. Match up heroes against enemy combatants and unleash high-octane battles as you fight your way to victory in this adventure game inspired by the action-packed animated Marvel TV series. Features: * Smash, dash and crash with fully powered heroes in 3D! * 12 Super Hero Squad characters and six villains – including Dr. Doom and Magneto! * Seven full levels including a new level that lets you play as the Super Villains! Plus take to the air in two extra flying mini-levels. * Unlock Challenge Levels and new hero costumes throughout the game.