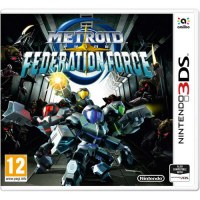 We buy for: £2.53
Sell 3DS Games. Get Cash for Metroid Prime Federation Force. Metroid Prime: Federation Force is the latest entry in the Metroid Prime series. In local or online* co-operative multiplayer, work together as part of a group of up to four players to fulfil the missions prepared for you. Each player controls a Galactic Federation Marine and pilots a blaster-equipped robot called a Mech, which they use to complete missions. At the start of missions, you'll be provided with different sub-weapons, and one of the keys to a successful mission is deciding which weapon each member should take. Between missions you can also enjoy a round or two of the 3-on-3 sci-fi sport Blast Ball. Also including Metroid Prime: Blast Ball. Blast Ball is an original futuristic sport, somewhat like football. Each player controls a Mech with the aim to shoot at a giant ball, and try to get it into the other team's goal to score. Matches are three vs. three multiplayer matches, and the first team to get three points ahead of the other, or the team with the most points after five minutes wins. Three different kinds of item will appear at random during the match, and using them at the right time is the key to victory. Intuitive controls and simple rules make this an easy game to pick up and play. * Up to four players take on a variety of co-op missions in this first-person sci-fi shooter set in the Metroid Prime universe. * Work together as a team to clear out enemy-infested bases and complete objective-based missions in local and online multiplayer. * Aim using the Nintendo 3DS family systems' motion controls. * Pick up and play Blast Ball, a 3 vs. 3 sci-fi sport where players shoot the ball into the opponent's goal to score.