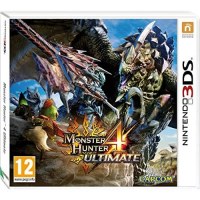 We buy for: £4.02
Sell 3DS Games. Get Cash for Monster Hunter 4 Ultimate. Take up your weapons, greet your fellow adventurers and head for the field to battle huge, fearsome creatures in Monster Hunter 4 Ultimate on Nintendo 3DS and 2DS! With full online and offline co-op play, the fight for the land looms large in this sprawling action RPG! You are a wandering hunter who, after arriving at a small town, decides to earn bounties from the local guild by vanquishing troublesome creatures wandering the land. Some are small and paltry, others are gargantuan and momentous, but all bring rewards as they can be carved for raw materials used to craft weapons and armour. Equip yourself well, then learn your quarry's attack patterns and behaviours, and you'll emerge victorious. Each beast has unique weak points, so strategy and planning are your watchwords. As you begin your voyage, you'll discover Monster Hunter 4 Ultimate brimming with fresh features: explore vast landscapes through a narrative thread, as you voyage with a travelling caravan to discover new villages and people. As the environments become steeper, you'll reach greater heights – use elevation to your advantage by ascending walls and ledges, then unleash the new jump attack on your foes! Of course, the best hunter knows the importance of equipment, and the series' broad arsenal is expanded with two extra classes. The first is Charge Blade, a style of weapon configured as either a sword-and-shield or an axe, complete with a dual-level charge that absorbs energy from strikes to perform huge attacks. The other class, Insect Glaive, features long staves complete with flying Kinsects you can boost with all manner of powers. All 12 of the established classes have been updated with modifications to moves or combos, and as you hunt and carve tougher monsters, you'll craft hundreds of undiscovered artefacts and pieces of equipment – the most hardened hunters will want to set their sights on the new, rare G-rank gear! Battle is as tactical as ever: learn monsters' movements and attacks to gain the upper hand. One new weapon in the war is the ability to ride large monsters: launch yourself onto your target and land a flurry of blows, while holding on for your life! But beware – the tide can turn quickly, as larger enemies cause the ground beneath you to crack and tilt! Be careful not to slip as you might slide into the next area! Enemies can even be infected by a strange virus which turns them feral: expect more aggressive, faster and downright dangerous beasts than ever before! Features: * Play with faraway fellow hunters via Nintendo Network, or with nearby friends using Local Play. * Quest to defeat the biggest number of monsters yet across a deep, strategic action RPG. * Hundreds of combinations of weapons, armour and items let you tailor your character near-endlessly. * Scale vertical terrain, perform jump attacks and even stand atop beasts to strike from above!