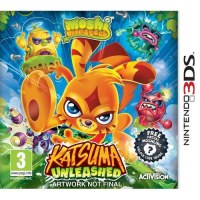 We buy for: £0.75
Sell 3DS Games. Get Cash for Moshi Monsters Katsuma Unleashed. Dr. Strangeglove has kidnapped Elder Furi and plans to force him to reveal the power of Moshi Picchi! You'll need to rescue him and save the day! It's not going to be easy though! On the way there is a whole army of Robot Moshlings to defeat, backed up by some of C.L.O.N.C.'s elite bosses too. Plus you'll need to rescue the other Moshi Monsters and hunt down all the lost World Tablet pieces. Not to mention a whole bunch of Moshlings to collect! So what are you waiting for, let the fur fly! Features: * 6 ACTION PACKED WORLDS TO EXPLORE. Jump, spin, dash and bash your way through 6 monsterific worlds packed with battles, baddies and a host of hidden secrets! From the lowlands of Pirate Bay to the snow-capped peaks of Mount Sillimanjaro and beyond, get ready to discover the farthest reaches of Monstro City. * DEFEAT THE ROBOT MOSHLINGS. Fur will fly with epic battles against Dr. Strangeglove's evil robot Moshlings - an army of dastardly drones sent to stop Katsuma in his tracks. You'll need all your skills to dodge Robot Blurp's flying spines, whack Robot DJ Quack, leap over Robot Long Beard and thump as many Glumps as you can! * EPIC BOSS BATTLES. Prove your skills as you fight your way through epic boss battles. Topple Sweet Tooth from his candy throne, take to the skies in a dogfight with Scare Force One, and rumble in the jungle with Big Chief Tiny Head before taking on the ultimate boss, Dr Strangeglove himself! * SUPER MOSHI POWERS. Unlock amazing superpowers, rescue your Moshi mates and access hidden hero areas and super short­cuts! Once unlocked, you can use your super powers to battle your way though even the toughest levels. Unleash the awesome Zommer eyeball attack, bash through walls with Furi's smash ability and discover secret areas with Diavlo's char-vellous flying powers! * MONSTERIFIC MINI GAMES. Unleash Katsuma in a multitude of monsterific mini games and unlock exclusive abilities, Rox rewards and Moshlings too! Every mini-game you unlock can be played on its own. Perfect for practising your monster moves!