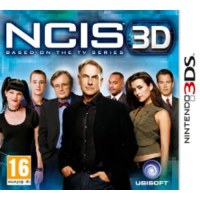 We buy for: £2.10
Sell 3DS Games. Get Cash for NCIS. The world of the NCIS TV show is now in the palm of your hand. Specifically designed for Nintendo 3DS, NCIS the Game takes the action from the hit CBS show to new depths by letting you join forces with the cast and immersing you in your own NCIS adventure in stereoscopic 3D. Features: * JOIN THE NCIS FAMILY: Join Agent Gibbs' team as the new "probie", and partner with the cast of your favorite TV show. Work together on the crime scene, help each other during tough suspect interrogations, and have each other's back in tense firefights. * STAR IN YOUR OWN NCIS ADVENTURE: An all-new NCIS story written with the writers of the show. Be the star of your very own NCIS adventure when a seemingly mundane murder case escalates into a race against the clock to thwart a major terrorist plot threatening national security. * BE IN THE MIDDLE OF THE ACTION WITH 3D: NCIS for Nintendo 3DS brings exciting new perspectives to adventure/investigation gameplay by truly putting you in the middle of crime scenes and heated gunfights. * BECOME AN ELITE NCIS AGENT: As an NCIS agent, use your guts and the technology at your disposal to solve the case. Engage in a vast array of activities including crime scene investigation, clues analysis, suspect interrogations, and action phases. Explore crime scenes to collect critical pieces of evidence; interject and use evidence to break suspects during dramatic interrogation sequences; make use of the latest technology to hack into computers and reveal new evidence through image analysis; engage in tense firefights using the stylus to aim and take down your enemies. * LEARN MORE ABOUT YOUR FAVORITE SHOW: Play and replay to find and collect all the trivia hidden in the crime scenes, and improve your knowledge of the show, storylines and characters.