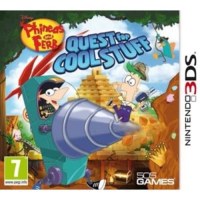 We buy for: £5.01
Sell 3DS Games. Get Cash for Phineas & Ferb: Quest for Cool Stuff. Join the clever stepbrothers, Phineas and Ferb, as they travel to out-of-this-world places in their latest invention, the A.T.T. The A.T.T. is an upgradeable, customisable, super-cool amphibious ride that brings the boys to temples, caverns and even the moon in their hunt for lost loot to display in their backyard Museum of Cool! Features: • Phineas and Ferb: Quest for Cool Stuff features many of the fan-favourite characters from the hit TV show, including Perry the Platypus, a.k.a. Agent P, Candace , Isabella, Buford, Baljeet, and the evil Dr. Doofenshmirtz. • Switch on-the-fly between ambitious innovator Phineas and silent, but stoic 'Man of Action' Ferb, as they explore an ancient lost temple, underwater caverns and more in search of treasure. • Experience four intertwining episodes filled with witty humour and wacky adventures and view the loot collected inside, including the lost Atlantis hieroglyph, caveman's first stone wheel, floating baby head and much more.