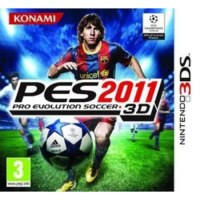 We buy for: £0.75
Sell 3DS Games. Get Cash for Pro Evolution Soccer 2011 3D. Designed specifically for the 3DS, PES 2011 3D offers an immersive take on the football genre, mixing the PES series' acclaimed level of control and realism, with the added dimensions the 3DS allows. Players can select from 60 National and 170 club sides, and lead them to glory within a range of challenging tournaments and leagues. Making stunning use of the 3D views the new system affords, PES 2011 3D puts you at the heart of every pass, through-ball and shot. A stunning active 'Player' camera centres on the user's every movement, dynamically following the action. As such, PES 2011 3D offers an intense recreation of being a key part of a successful team, alongside the series' esteemed stunning level of control. Defence-splitting passes, lifted through-balls and blistering first-time strikes coupled with quick passing, off-the-ball runs are all experienced at close hand, as the game's realism is literally taken to another level thanks to the game's incredible use of depth and distance perception. Using the 3D capabilities of the Nintendo 3DS, the camera views allow the user to visually ascertain how far away a team mate is, allowing for more instinctive long passes and dynamic movement. The game's stunning AI also ensures that players not only look identical to their real-life counterparts, but move and react like them too. PES 2011 3D also includes the UEFA Champions League option, allowing users to partake in the game's greatest club competition, while the legendary Master League invites players to build a team from scratch and help them dominate both at a club and global level. It also enjoys full commentary of the in-game action, while wireless play allows two Nintendo 3DS users to compete against each other. The new game also makes innovative use of the Nintendo 3DS system's 'Street Pass' mode, wherein the handheld senses another user with a stored Master League team, and will compare data. The user with the stronger team will be deemed the winner, while reaching specific targets will also unlock new players and teams for use in the main game.