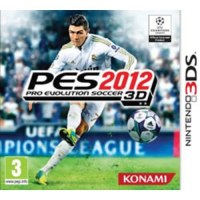 We buy for: £1.76
Sell 3DS Games. Get Cash for Pro Evolution Soccer 2012. PES 2012 3D offers unrivalled realism, and allow users exclusive entry into its recreation of the UEFA Champions League tournament, and also allows users to experience the thrills of South America's high-intensity Copa Libertadores league. Full control is offered over the game, with every pass, through ball, tackle and shot left to the player, and accessible via either the Circle Pad and buttons, or via a new Touch Screen control system where players use the Nintendo 3DS stylus to move their players. PES 2012 3D then focuses on the skills on show via a number of new, intelligent camera views that pan and swoop to cover the on-pitch action and show off the 3D powers of the Nintendo system, players are also invited to hone their skills in a number of game modes. The eternally popular Master League option made famous by previous home format versions of PES is now a vital part of PES 2012 3D, and allows users to shape and develop a team of unknowns into a dynamic football force. Similarly, the game's new Become a Legend option takes a more personal look at the game, charging the player with the progression of one player trying to establish themselves as a world-class talent.