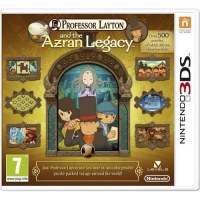 We buy for: £14.14
Sell 3DS Games. Get Cash for Professor Layton & the Azran Legacy. Join Professor Layton one last time on an unforgettable puzzle-packed voyage around the world! Solve puzzles in order to discover the puzzle behind the secretive Targent agency and uncover the mystery of the Azran civilisation! The final chapter of the Professor Layton series takes puzzle solving around the globe in the gentleman professor's most ambitious outing to date. After receiving a mysterious letter claiming that a living mummy has been discovered, Professor Layton and his team head to a city nestled in the frigid Arctic. There, they release a young lady encased in a prison of ice, setting in motion a grand adventure aboard an airship that will take them to spectacular places as they solve the mysteries of ancient civilisations. Features: * Over 500 puzzles, 150 new puzzles in the game, as well as 385 daily downloadable puzzles! * There are three new mini-games in the Professors Trunk to enjoy during the adventure: Dress Up: Play fashion consultant to an assortment of colourful characters you meet on your travels. Mix and match the items you find to create the perfect outfit for each character. Nut Roller: Take control of a squirrel who needs to manoeuvre her delicious walnut into a goal on an obstacle course. Roll rocks and acorns around the courses to take out obstacles and to push the walnut towards the goal. Blooms and Shrooms: Tend to a flower garden with a difference, one that is filled with surprising flora. Deftly plant flowers in specific positions to avoid noxious shrooms and fill the garden with beautiful blooms to win. * New Treasure Hunt mode, allows you to share challenges with other players of Professor Layton and the Azran Legacy via StreetPass encounters. During your adventure you will be able to collect up to 100 objects, which you can challenge others to locate within their own games via StreetPass. This blend of memory and exploration also rewards fellow Professor Layton fans with prizes, such as 3D objects to decorate your airship with or hotel tickets that reveal special dream sequences with fan-favourite characters of past games.