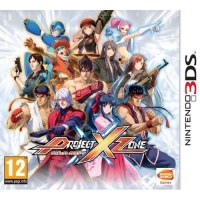 We buy for: £12.49
Sell 3DS Games. Get Cash for Project X Zone. Three game makers team up for the ultimate crossover! Capcom, Sega, and Namco Bandai Games are kicking off the ultimate crossover project! PROJECT X ZONE for the Nintendo 3DS is a strategy RPG that features most beloved game characters working together to fight off foes in a world that mixes together scenes from games released by all three publishers. The biggest battle in game history is about to begin! When a rift in time and space suddenly appears, a doorway to various universes is opened allowing both heroes and villains from different worlds to cross paths. Players will be able to take control of a huge selection of paired heroes including favourites such as Jin and Xiaoyu (TEKKEN), Toma and Cyrille (Shining Force EXA), to X and Zero (Mega Man X) and discover the cause of the rift and stop evil from coming through and spreading into their world. Features: * The biggest roster ever: Enjoy over 50 characters from 29 franchises from Namco Bandai, Capcom & Sega, including Darkstalkers, Valkyria Chronicles, Street Fighter, Tekken, Mega Man, Resident Evil, and many more. * Unique tactical gameplay: Control the Cross Active Battle scene with the Control Pad and A Button, linking your moves together to form combos. It's a simple system that allows for a wealth of strategy, letting both beginners and seasoned players get the most out of the action. * Create your team and join the battle: In Project X Zone players will use a team of two characters known as a Pair Unit to explore the world within the game. An additional character known as a Solo Unit can be combined with the Pair Unit to assist in battles. * Never seen before cut scenes mixing all your beloved characters.