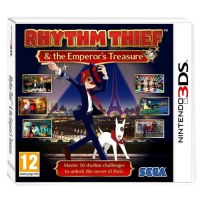 We buy for: £9.79
Sell 3DS Games. Get Cash for Rhythm Thief & The Emperor's Treasure. You'll need your sharpest sleuthing skills and some stellar dance moves as rhythm games get a twist of mystery in this all-action, toe-tapping title, exclusively on Nintendo 3DS. Rhythm Thief & the Emperor's Treasure combines a gripping story and a groovy beat as you take control of sharp-suited thief, Raphael, famous for stealing paintings only to return them several days later. You're on the case as you try to solve the mystery of his father's disappearance, all the while deftly dodging the police, sidestepping museum guards - and running into the Emperor Napoleon! The action takes place in a gorgeously-rendered anime-style Paris, its bright lights and iconic landmarks brought to vivid life courtesy of the Nintendo 3DS. You'll race round the city, cracking puzzles, uncovering clues, and pilfering precious artworks - always returning the loot, of course. The action ranges from thrilling rooftop chases to furtive visits to museums at night, pulling poses to match the statues and outfox the guards. Features: * Collect fans via StreetPass by taking part in dance challenges, triggering new missions and encounters with new characters. * Take on a friend in one of eight multiplayer levels, including dancing, shooting, and infiltration minigames. * Tap the screen, swipe the stylus and control the gyro to the beat of the music to manoeuvre Raphael in the variety of rhythm-based challenges. * Dive into the world of Raphael and get immersed in this colourful adventure with 3D maps and stylish animation that bring the streets of Paris to life. * Unearth the clues hidden behind treasures scattered around Paris to unmask the truth about Raphael and the secret of the city.