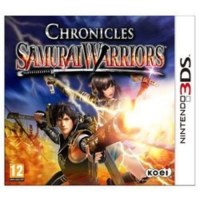 We buy for: £2.53
Sell 3DS Games. Get Cash for Samurai Warriors: Chronicles. Offering an all-new fighting style of One vs. Thousands, players of Samurai Warriors: Chronicle can now enjoy beating countless enemies using the simple, intuitive controls of their Nintendo 3DS system. These two main characters in Samurai Warriors: Chronicle act as players' avatars and each possesses their own unique weapons. By selecting between the two characters, players will be to enjoy different gameplay styles. As the story progresses players will discover the ability to edit their chosen character - such as changing their outfits and accessories, as well as giving them weapons used by other Samurai officers. Furthermore, depending on how you play the game, during the later parts the gameplay scenarios may intersect, offering you a choice of battles to participate in. Choose wisely, because once you've selected a battle, you are forced to ally yourself with your choice and, as a consequence, will develop trustworthy allies as well as arch-rivals. Your choices also give you the chance to build firm bonds with other Samurai and experience the Warring States period like never before. Are you ready to do battle in this epic adventure? You'll need to utilise all the skills and strategic tactics in your arsenal to succeed!