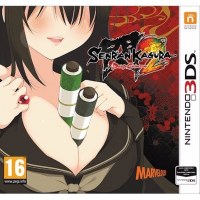 We buy for: £70.24
Sell 3DS Games. Get Cash for Senran Kagura 2 Deep Crimson. SENRAN KAGURA 2: Deep Crimson is the latest Nintendo 3DS title in the infamous SENRAN KAGURA franchise. For those who aren't familiar, expect a fast-paced beat-em up game with insane combo chains, plenty of playable characters, hilarious cutscenes and an abundance of tantalising action! The game picks up directly where its Nintendo 3DS predecessor SENRAN KAGURA Burst left off, and follows the Hanzo & Hebijo Shinobi Academies as they battle for good and evil respectively. This time, however, there is a greater evil at work. The tyrannous tycoon behind the Hebijo Academy is hell-bent on raining terror across all of Japan by utilising a destructive army of summoned demons! This great danger thrusts the girls together and forces them to unite and work as one in a way the series has never seen before!