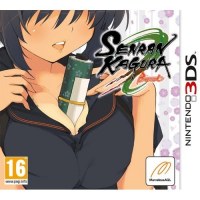 We buy for: £20.74
Sell 3DS Games. Get Cash for Senran Kagura Burst. The more the girls fight, the more damage their clothing takes. The more revealing their costumes get, the more dangerous they become! Senran Kagura is a scrolling beat-em-up similar to the classic Streets of Rage - only with exponentially more depth. Play 10 characters each with a range of unique abilities, fighting styles, weapons and costumes. Change costumes and customise your characters to alter their abilities and fighting style for a much deeper brawl. Senran Kagura has been praised for its detailed character models, crystal clear visuals and dynamic combat for hugely satisfying and kinetic battles. Not to mention its use of the 3DS’ unique functions – blow on the 3DS to lift the girls’ skirts up and view their… er, key features… in stereoscopic 3D! Features: • Two games in one – with both Japanese releases on one card! • In depth RPG elements with strong character development. • Character’s skills and abilities completely evolve in play style from their starting character – for superb replay value. • Fully voiced dialogue both combat and story sequences.