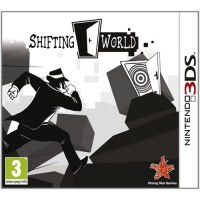 We buy for:
Based on the award-winning Shift series originally by Armor Games, which has been enjoyed by over 16 million players on the web, the Nintendo 3DS version is the first to be played on consoles and introduces an all-new art direction, level editor, 3D functionality and a level generator of awesomeness that works by taking pictures of DataMatrix barcodes with the 3DS camera. Features: • Shifting World is the first of the SHIFT series to adapt the famous puzzle gameplay to full 3D. • Shift the wold from black to white and white to black. Use that to overcome the obstacles and escape from each room. • A new layer of puzzles: switch from 3D to 2D and from 2D to 3D with a button. • Level editor and level generator that creates levels based on photos of DataMatrix barcodes. • More than 60 levels across Adventure Mode, Bonus Mode and Time Attack Mode!
TD159
Check out what our customers say Click on any logo to view feedback
Trustpilot