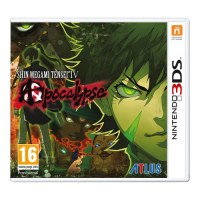 We buy for: £59.24
Sell 3DS Games. Get Cash for Shin Megami Tensei IV Apocalypse. Debuting as the top seller for its launch in Japan, Shin Megami Tensei IV: Apocalypse depicts the remnants of Tokyo ravaged by a catastrophe. Demons and humans co-exist, but in this state the remains of humankind are just a prize being fought over by the higher deities. One lone Hunter, the game's protagonist, meets an early demise and through a pact with a lesser god is brought back to life in exchange for his pledge of servitude. From there, the protagonist allies with other Hunters in the ruins of post-apocalyptic Tokyo, beginning a plot that crosses over with the events of the original Shin Megami Tensei IV. Features: * Decide the Fate of Mankind: The Shin Megami Tensei series, known for exploring the tenuous symbiosis between man and deity, reaches deeper than ever in SMT4A as the band of main characters must decide which side of peace or anarchy they are on. * Demons Aplenty: SMT4A has nearly 450 demons to fight, fuse or recruit to player parties, with demons from a wide selection of cultures and religions. * Fuse for Affinities: Demon fusion, combining two or more demons to form a more powerful one, is a cornerstones of SMT games. * Language: The game features English voice over and text.