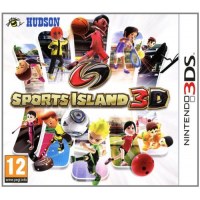 We buy for: £1.05
Sell 3DS Games. Get Cash for Sports Island 3D. Sports Island 3D marks the debut of the popular Hudson Soft series on the new Nintendo format. Included are soccer, tennis, basketball, ice hockey, snowball fight, sumo wrestling, bowling, snowmobile racing, sport blowgun and trampoline. All of these sports require different skills, and each one becomes a spectacular 3D event thanks to the new hardware capabilities. Power ups, which give the players advantages during the matches, offer additional suspense and competition. These so-called “Super Play” moves surprise the opponent with attacks that are unbeatable more often than not – with a huge tennis racket, a powerful basketball jump, or an unstoppable swerve ball. In the four-player modes, the 3D athletes compete wirelessly or via download play, where only the host needs a game card. In a variety of game modes, the players either compete with each other or try to break records together. Features: Up to four players prove their skills in ten different sports. Single and multiplayer mode. “Super Play” moves. Create your individual team.