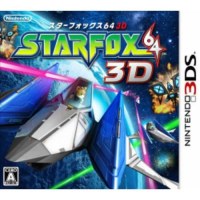 We buy for: £3.58
Sell 3DS Games. Get Cash for Star Fox 64 3D. The Star Fox team triumphantly returns to one of its greatest missions with the remake of Star Fox 64 in full 3D. The entire Star Fox universe spreads out realistically into the depths of the Nintendo 3DS screen while the 3D visuals give the player a clearer grasp of distance and position. This makes the game more approachable and intuitive, thereby allowing players to focus on the action. Star Fox™ 64 3D also puts the two screens of the Nintendo 3DS system to use, with the top screen featuring 3D game play and the bottom screen displaying the various characters and their dialogue. Features: • 3D update of Star Fox 64. o A complete graphical update brings a Nintendo classic into the glasses-free 3D age. • Multiplayer. o A new multiplayer option lets up to four players engage in fierce dogfighting action via a local wireless connection on their Nintendo 3DS systems. Multiplayer mode features new power-ups and weapons. • Thrilling new features ups the Star Fox mania. o The new Score Attack Mode allows the player to revisit any planet and play for a high score on that level. o New features also allow first-time players to enjoy the excitement of Star Fox.