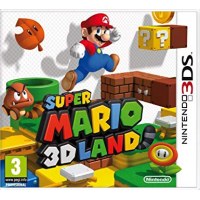 We buy for: £4.51
Sell 3DS Games. Get Cash for Super Mario 3D Land. Super Mario sees Mario into a 3D world where, for the first time, you can see the depth of the land, rather than a rendered 3D game where depth perception can be tricky! Pulling from Mario games of yesteryear, Super Mario exclusively for the Nintendo 3DS will feature abilities that Mario fans have been asking for to make a return such as the Tanooki tail, giving Mario the ability to hover, glide and attack. Mario will also gain some new moves in Super Mario to add to his impressive repertoire such as the Somersault attack and the ability to run faster with the dash move. Super Mario comes at you with: Circle pad controls giving you more fluid and accurate controls as you adventure into the 3D world of Super Mario. All-new enemies will try to hamper Mario including Goombas with Tails, stacks of Goombas and a new Piranha Plant that spits ink at the camera. New moves and some old ones to despatch the latest bunch of Goomba goons that really make Mario, Super Mario! Better depth and distance perception thanks to the glasses free 3D of the Nintendo 3DS in Mario's all-new adventure!