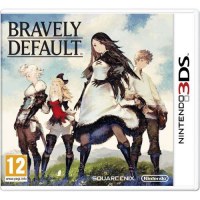 We buy for: £16.34
Sell 3DS Games. Get Cash for Bravely Default: Where the Fairy Flies. Bravely Default: Where the Fairy Flies is now available exclusively on Nintendo 3DS. Embark on a journey in the world of Luxendarc, the welfare of which relies on four elemental crystals. According to tradition, crystals are looked after by chosen priestesses, the vestals, who all bear the name Oblige. As of late, terrible events have befallen the land and the power of the crystals seems to be waning. Follow the quest of Agnès Oblige, the Vestal of Wind, and her companions, as they race to restore balance in Luxendarc by awakening the crystals. Features: • Traditional JRPG feel with an inventive storyline involving parallel worlds. • Ground-breaking Brave/Default system makes for engaging battles. • Exchange profiles with other players to learn abilities or summon them in battle. • Take a break from the main adventure by rebuilding the village of Norende. • Choose between many jobs, equipment and abilities to customize your party.