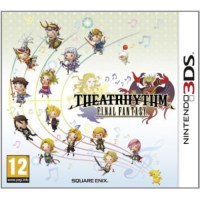 We buy for: £4.51
Sell 3DS Games. Get Cash for Theatrhythm Final Fantasy. In THEATRHYTHM FINAL FANTASY, you'll embark on a quest to restore the rhythmic balance of the universe in a Nintendo 3DS exclusive that combines a host of familiar features from the ultimate RPG series with Touch Screen-tapping, stylus-sliding rhythm action. Whether you're a rhythm master or a complete beginner, THEATRHYTHM FINAL FANTASY offers you the scope to play your way. Start by creating your own dream team, picking a party of heroes from an unbeatable line-up, ranging from the Warrior of Light from the original NES classic, right through to Lightning from FF XIII. Each character's abilities can be customised, and you'll be using your rhythmic sense to gain experience and boost character attributes such as agility, magic, and luck. The three main modes, Field, Battle and Event, offer the full Final Fantasy experience. You'll journey through the rich and varied game world, take on terrifying foes with perfectly timed taps on the Touch Screen, and relive well-loved events from the series, with your rapid-fire stylus skills rewarded with extended versions. You can also add an extra dimension to the fun by connecting with up to three friends via Local Play, uniting your forces to clear the same track. • Create your own profile card and exchange it with other players via StreetPass. • Visit the Museum to view your haul of CollectaCards, featuring characters from the Final Fantasy series. • Collect Rhythmia and EXP to unlock short movies and music as you progress through the game.