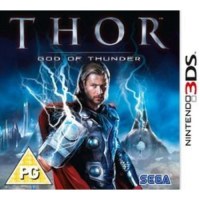 We buy for: £2.53
Sell 3DS Games. Get Cash for Thor God of Thunder. Thor: The Video Game will delve deep into the heroic tales of the Thor universe. Eisner Award-winning writer and lead Thor comic book author Matt Fraction brings authenticity to the narrative as a story consultant, and elevates the story beyond the comic and movie universe throughout the video game. Players will take on an array of ancient enemies and beasts from the many worlds of Norse mythology by using different battle strategies and elemental powers. The sacred Mjolnir, Thor's legendary hammer, will allow players to command the powers of the storm: wind, thunder and lightning. By earning Valor in combat throughout the game, players will also be able to select from a wider range of abilities, acquire new attacks, powers and upgrades. Presented in a comic book style, allowing fans to explore new content in the same universe.