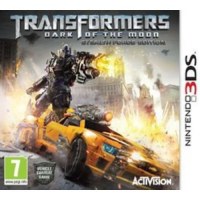 Transformers Dark of the Moon

We buy for: £1.05
Sell 3DS Games. Get Cash for Transformers Dark of the Moon. It has been three years since MEGATRON and the DECEPTICONS last threatened the world. Earth's leaders believe that MEGATRON has fled the planet in defeat-but OPTIMUS PRIME knows better. An alien transmission is intercepted, exposing MEGATRON'S plan to spread chaos and fear among the humans, and unleash the ultimate DECEPTICON assassin: SHOCKWAVE! The AUTOBOTS must hunt MEGATRON, neutralise SHOCKWAVE, and save their new home from total destruction at the hands of the DECEPTICONS. STEALTH FORCE EDITION. Exclusively on the Wii and 3DS, the war between the AUTOBOTS and DECEPTICONS continues in Stealth Force Mode. Control heavily weaponised vehicles as you engage in epic vehicular combat to save earth from total destruction. KEY FEATURES. * SPLIT SCREEN MULTIPLAYER (Wii Only) - Wage war with a friend in split screen multiplayer. * VEHICULAR COMBAT - Play the entire game in stealth force and wield the power of high intensity weapons in vehicular combat. * 18 STEALTH FORCE MISSIONS - Wage war between the AUTOBOTS and DECEPTICONS in Urban, Desert and Frozen locations from Siberia to the South American Deserts.