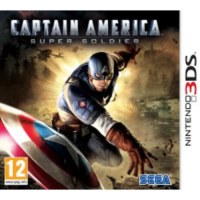 We buy for: £4.51
Sell 3DS Games. Get Cash for Captain America: Super Soldier. Become Captain America, the ultimate Super-Soldier, as you face the Red Skulls army in this gripping original third-person action adventure set in the darkest days of World War II. Wield Captain Americas legendary shield to take out enemies at a distance, interact with your environment, and deflect incoming fire back at foes as you traverse Hydras massive castle to save the world from Caps villainous archenemies. Get ready to hurl yourself shield-first into the fray create your own superhuman feats with the superior force of the worlds first Super-Soldier at your fingertips. Features Play as Captain America: Battle enemies bent on world domination in a unique World War II setting, using your Super-Soldier abilities to infiltrate a castle overrun by the forces of Hydra and destroy the forces of evil. Wield Caps Legendary Shield: Your shield delivers a variety of punishing missile attacks, as well as tough defense. Take out groups of enemies, block attacks, destroy objects, interact with surroundings, and reflect fire back at foes. Devastating Open Combat: Move freely through the castle battlefield with acrobatic precision as you take down multiple enemies with punches, kicks, shield throws, and powerful combos. Take control of a turret or grab a soldier from behind and use his weapons against him.