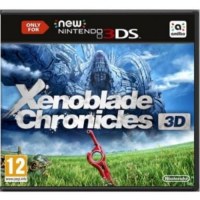 We buy for: £6.05
Sell 3DS Games. Get Cash for Xenoblade Chronicles 3D. In a vast world of adventure, where the action stretches as far as the eye can see, you must battle evil in the sprawling RPG Xenoblade Chronicles 3D, only for New Nintendo 3DS and New Nintendo 3DS XL. An almighty crash heralded the sudden arrival of the Bionis and the Mechonis to this world, for the two titans were locked in a timeless battle. Once the dust had settled, only their corpses remained. Now, the Bionis' enormous body, covered in lush plains, is home to a developed civilisation, the Homs. But life on Bionis was not destined to flourish forever. One day, a horde of mechanical life forms from the Mechonis launched an all-out attack on the inhabitants of Bionis. The Homs' only remaining hope is a legendary sword, Monado, said to be a gift from the titan itself. Unfortunately, whosoever wields the sword must endure a great toll on their body… As hero Shulk, you set forth on a mission of revenge to destroy the Mechon. Accompanied by supporting characters Dunban, Reyn and Sharla, among others, you'll experience extensive exploration, and battle against mechanical enemies, using strategy and special powers with a variety of characters. There's plenty to discover in locations other than your main destinations, and there are also times when you'll need to look above and below you! Every resident of Xenoblade Chronicles 3D's towns performs different actions, depending on whether it is morning, evening or night, bringing to life this rich and diverse world. Inevitably, you will be drawn into battles with roaming enemies, each visible in the field. Combat combines action game-style attacks and turn-based tactics: pick your moment during battle to perform special actions known as 'Arts', which, once used, must cool down. Communicating with your party and increasing party affinity allows you to perform powerful Chain Attacks, and you can also give simple commands to your party members, directing them to concentrate their attacks on a certain enemy, for example. When the battle is over, you will receive experience that lets you level up and points that you can use to customise your abilities. Having two screens is a boon, as the Touch Screen lets you oversee your characters' conditions, while keeping an eye on the map. This keeps the 3D screen clear to host the game's stunning vistas. Beyond the main adventure, Xenoblade Chronicles 3D includes a Collection Mode that features 3D models and soundtrack excerpts to enjoy. These are unlocked by trading tokens obtained through gameplay, which can also be obtained by meeting other players via StreetPass, spending Play Coins or using a Shulk amiibo. Features: * Delve into a deep, expansive RPG adventure set in a world that stretches to the horizon. * Combine strategy and action in an exciting battle system, and even avert disasters with future visions! * Explore an ever-changing world containing a huge roster of supporting characters and enemies. * Experience over a hundred hours of gameplay through intricate customisation and side quests.