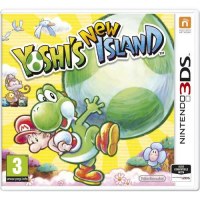 We buy for: £3.58
Sell 3DS Games. Get Cash for Yoshis New Island. Yoshi's New Island is the first instalment in this series since Yoshi's Island DS was released in 2006. Yoshi's good old Flutter Jump, Ground Pound and egg-throwing return, along with new abilities and challenges that take advantage of the features of the Nintendo 3DS. You can use massive eggs called Mega-Eggs to destroy blocks and pipes, revealing secrets such as coins and hidden keys. The more things you destroy, the higher the Mega-Egg gauge goes, netting you extra lives in the process! Rendered in a variety of art styles that illustrate the fairy tale charm of the Yoshi universe, Yoshi's New Island invites you to gobble up or stomp on enemies big and small in a bid to help safely reunite Baby Mario with his brother! The tale of Yoshi's New Island is a sequel to the Super Nintendo title Super Mario World 2: Yoshi's Island, and is set in a new location, Egg Island. In this new chapter in the series, Baby Luigi has been whisked away once again, leaving it up to the Yoshi clan to keep Baby Mario out of harm's way and embark on a mission of discovery.